I saw a rainbow in a cloud
surrounded by blue sky
even after I blinked
once, twice, thrice

I saw a rainbow in a cloud
my father in law said,
"Means rain's coming"
it's the farmer in him 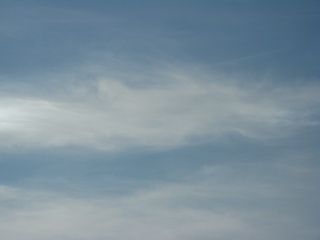 Both of these pictures were taken from the back seat of a moving car while travelin' at legal speeds along I-55, headin' south, on the evening of September 20, 2011. We were on our way home to Central Illinois from Chicago, after consulting with two specialists for my husband's upcoming cancer surgeries. Yes, surgeries plural. Instead of one big operation, to remove cancer from two areas of his body, he is going to have two separate surgeries, two months apart.

I wrote this poem longhand in my sketchbook on September 22, 2011, while my youngest son was at soccer practice. Before I wrote it, I spent some time trying to draw it from my mind's eye, using the crayons and markers I had in my possession. They didn't do it justice though. It was such a beautiful sight.

I didn't know I'd managed to take a picture of the rainbow in the cloud, until I downloaded the pictures from my camera a few weeks later, on October 6, 2011. Just yesterday. We're now at the hospital with the specialists, where my husband is recovering from his first surgery. So far so good. Things are looking UP, as we continue to praise God for bringing us this far in my husband's cancer treatment. Our strength and courage come from the unceasing prayers of family and friends, as we rest in the promises of God.

8 thoughts on “I saw a rainbow in a cloud”