Living in a house with three boys, the big one I married and the two we made together, is Always An Adventure. A few years ago when my oldest son was in third grade he was old enough to join 4-H. As a ten year 4-H'er myself it was fun to begin this Journey with him. My husband was in 4-H too. Though it's changed a lot since our days spent in Club and showing projects at the fair. There are a lot more technology projects as well as engineering and other fields of science. Our youngest son joined a club too. The younger siblings of 4-H'ers attend Cloverbuds where they learn about a topic all year through stories, crafts, activities and games. It's so nice he has a place to go that's just for him on 4-H night.

The April meeting was held last night. There was a smaller crowd than previous months. Some children arrived still in their practice clothes from baseball. The Business Portion of the meeting went by quickly. The Time For Talks had arrived. My oldest son, T.J.B., had previously given a talk on Robotics, meeting the requirement of one talk per 4-H year. However, last month he volunteered to give another. That is, if it was OK with the leaders, who had a hard time closing their incredulous gaping mouths as they nodded, "Yes." He was officially on the agenda. The project he chose to present last night was Entomology. This is his third year in 4-H and his third year taking this project. Bugs. Insects. Preserved and labeled for science and posterity.

He gave an Entymology demonstration speech to a very interested crowd. He brought his insect collection to show as well as a helpful How To book, his homemade pinning block, some extra insects for demo purposes, a label sheet and the piece de resistance, A Kill Jar. Just the name of which makes everyone sit up straighter and their ears perk up ever so attentively. They were mesmerized. It helps that my son knows how to charm a crowd. The kid's a natural. His father and I marvel at his ease and comfort at Public Speaking. He had his outline at his elbow and discussed each item in detail. 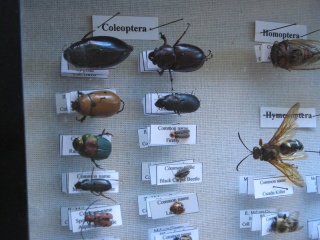 Imagine my surprise when he gave me a Shout Out for one rather large Stag Beetle in his collection. (The Stag Beetle is the second from the left in the top row.) Going so far as to share the story about the day we came out of church and spied a Big Beetle crawling along the concrete. As he told the story he said, "We didn't have an baggies to collect the specimen in. So My Mom just picked it up and carried it all the way home in the van." I sat a little taller after the "ooohs" and "ahhhs" and accolades for my Insect Prowess and Bravery that followed. At the end, one of the leaders even asked him if he'd be interested in giving a How To Seminar during Club for other children considering taking Entomology as a project.

He could have talked all night on this topic that is near and dear to his heart. There were other children on the agenda for speeches though. I was impressed with how attentively my son sat and listened in return, asking thoughtful questions at the end of each of the other speeches. When they were all through we carried his Display Case and Box of Props to another table closer to the door for our nearing departure. On the way there, some parents and children who had been involved in a different club activity, and hadn't heard his speech, started asking questions. I set the Display Case down and opened the Box of Props to answer their questions. When T.J.B. realized I was fielding his questions he said, "I can answer their questions." Very Grown Up and Self Assured.

So, I stepped away and started putting away the rows of folding chairs to save time when the meeting officially came to a close. I kept an ear open for his voice and my eye wandered his way more than once. I'd left home without my camera. That in itself isn't unusual. However, I do take it to Club when he gives a speech, to save the memory of that moment in time for posterity. Last night it wasn't the speech I wanted the camera for. It was this Impromptu Question and Answer Session that took place after the Official Talk had been given. How I wish I had a picture of him behind the table with four older girls on the other side. They were all leaning in to see the insects better and asking him questions about them, which he answered one by one and in order.

There was my nearly 11 year old son. Wowing the Ladies with his Insect Collection. He's finishing up 5th grade. I see the writing on the wall. The girls notice him, because I watch them, but he just sees his friends. It's all still, "Ooey Gooey Love Stuff" to him. Now, don't get me wrong. It IS a COOL collection! He has some really unique insects and great stories to go with many of them. There is the Giant Water Bug his maternal Grandma and Papa brought home from a Florida vacation. There is a Cicada Killer, an insect he was longing to obtain, that his maternal Grandma found dead, just laying on the sidewalk in prime condition while on a walk around her neighborhood. There are the insects his paternal Grandma caught, killed, stored in baggies and then brought to church in her purse for a Hand Off before the fair. Some he caught shoulder to shoulder with his paternal Grandpa walking around their country yard, armed with a net and a Kill Jar. We've ALL learned a lot about Entomology the past few years! However, when it comes to Insect Attraction, I can tell this is just the beginning.