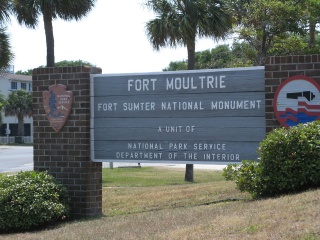 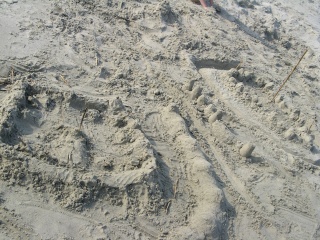 I helped them both
one with his moat
the other with his outer wall
we played there
until 7:00 p.m.
my husband watched us
lost in thought
taking pictures
with his zoom lens
staying dry
this time 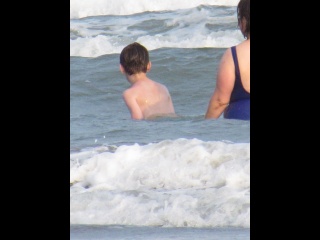 my youngest son
loved the waves
SO MUCH
"This is awesome!"
"This is totally awesome!"
"Monster wave!"
"Cowabunga!"
"Tsunami!"
over and over again
"Bring it on!"
to a select few
arms up
welcoming the power
of the ocean
reveling in it
savoring it
He asks,
"How many more minutes?"
I reply, "How many more waves
do you want to jump in?"
he said, "50"
we made it to 32
then his brother came
to say, "Time to go"
we followed him
back to the beach
reluctantly

This entry is nearly identical to how I wrote it longhand in my Trip Journal. Instead of separating the Beach Time from the Water Time into two poems, I've kept it together to flow here the way it was written at the beginning of June. My youngest son has LOVED THE BEACH, since he was three years old. That is when he spent a week playing on the most beautiful white beach in the Caribbean. Yes, it was as Magical and Fairy Tale Wonderful as it sounds…more so actually. He'll be a Surfer Dude someday. I just know it.

While standing in the waves alongside my Growin' Up So Fast youngest child, I realized I was being A Hover Mother. Even as I welcomed and savored the power of the ocean, those waves freaked me out. For him. They are so unpredictable, as is Life. My son was always in arms reach. He kept saying, "I'm OK, Mom", when I asked how he was doing. And he was. Thankfully. I have Fears. Oodles of them. Makes me Human. Keeps me Real. I don't want to pass them on to him though. I want to help him be Brave and Courageous. The same way he has helped me be braver, as I explore beside him and learn to let go and give him space to test his wings. Without holding him back. Even when it hurts, on the inside. Today he turns eight. My Adventurous Youngest Son. Time does fly. Especially when you're having fun. Like those three fleeting hours we spent on a beach in South Carolina at the beginning of June when we ran away from home. Together.