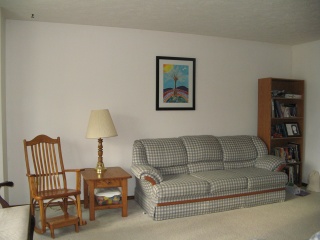 We're in the process of some Home Improvements here. Adding another layer to the chaos that already reigns. I shared these BEFORE and AFTER pictures on my Facebook profile on March 30, 2011. My friend Lydia wrote, "Um. Your house is fantastically clean! If you need a toddler or pre-schooler to come muck it up for you, you just let me know."

Here is my reply…

I am a former Art Director.
I know a thing or two about staging shots…
My house is a Whirlwind of Chaos and it suits me fine.
Paper, LEGOs, Clone Troopers and guns, blasters and bullets galore.
Boys Very Much LIVE Here.
Also, the Living Room is my one clean room. I can say it for the world to see.
It's the room with no TV that's great for reading and daydreaming and visiting with a friend.
The painting about the piano is titled, "The Reading Room".
The children drag their toys upstairs and play in the center and know they have to drag them back down when they are done.
We also rearrange the couches into forts for firing nerf darts at each other and throw blankets over chairs to make a hideaway as well.
This is where the tent pops up for camp outs indoors and where my oldest practices violin too.
It's the room we didn't know what we were going to do with when we bought the house and we've found lots of way to enjoy it.
The Christmas tree goes in the corner where the rocking chair is at Christmastime.
When toddlers and pre-schoolers come over to play I still have wooden blocks tucked under the end tables (you can see them) and we get them out and play in the middle of the floor.
Love the natural light from the front windows too.
Love, Janean
P.S. All the crap is in the dining room. I have to figure it out where to put it all so we can paint in there soon…I cropped that open doorway out of the shots. Here I am giving away more secrets…) 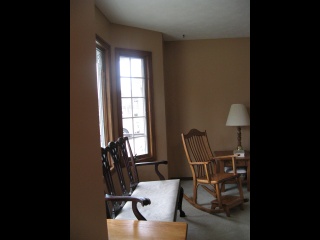 On April 2, 2011 I added a few more pictures to the album with this note, "Lived In Living Room pictures have been added to the album."

Here they are as well… 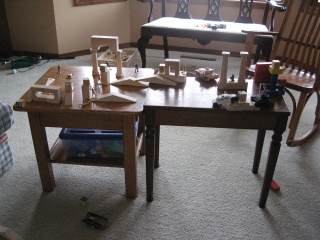 Lived In Living Room, March 2011. Blocks set up as a NERF dart firing range. Violin music stand in corner by bookcase. NERF gun on the couch.

Lived In Living Room, March 2011. Blocks set up as a NERF dart firing range. Violin and music left on couch seat instead of tucked behind the love seat. NERF gun on the love seat.

Kathyrn Hall summed it up it best, when she wrote on Facebook, "By all appearances, it's a loved in living room as well as a lived in one." Yes. It is BOTH.