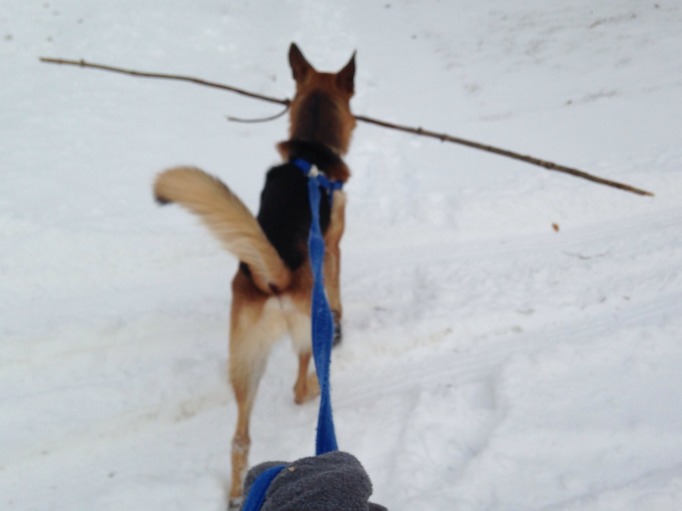 Blue dog had me laughing on the sidewalk this morning. First, he unearthed this ginormous stick from under the snow, then he turned around and proceeded to carry it home, with his tail wagging to and fro. Every so often he’d turning his head to the side and grin at me, careful to keep his prized giant stick clamped between his wolf-like teeth. This dog, he’s good for me in so many ways. There was no stopping for a photo op either, I took this photo on the move. I took several. This is the only one that shows the whole entire stick, end to end, as well as the end of my gray mittened hand. We’re inside now. Thawing out. Escapades from our second walk of the day. There will be more. Escapades and walks. For the record, I call this, “Blue’s Stick Relocation Program.” He picks them up here, drops them there, and circles back to pick them up again, days later. Funniest of all, was Blue looking over toward Luna’s fence as he walked by. Wanting to show off to his best girl just a l’il, like the hound dog that he is when it comes to pretty girl dogs, squirrels and rabbits. Dog. He’s a dog. Mine. Well, we belong to each other. Woof. 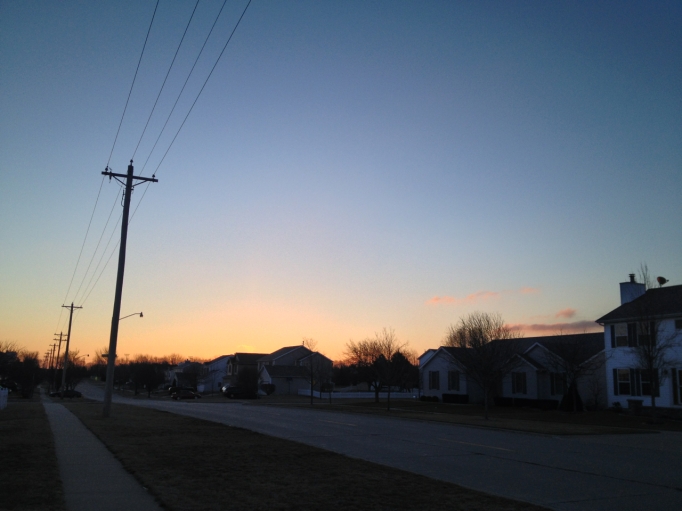 I savored the rosy glow of sunrise along the horizon, while walkin’ Blue this mornin’. The air has a snap o’chill, yet I’m thankful there was no bitin’ wind.
(Now home from walk. Ready to thaw with coffee, eggs and toast. Check my Weather App. Temp: 13 degrees Fahrenheit. Feels like: 0 It’s officially brrrrrr)