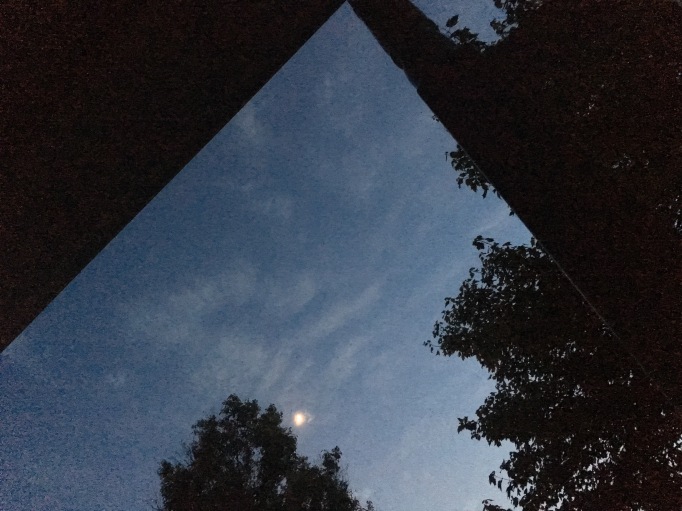 I’m sitting on the front porch steps. Blue is happily belly in the grass. The night is quiet, other than crickets and some faraway traffic sounds. There is a light breeze. Fireflies blinking. I want to stay in this moment. I’m lingering as long as I can. [9:00pm]

The firefighters just flushed the hydrant in front of my house
Little unexpected excitement
Blue heard Jake barking while they did the hydrant around the corner
We had to go investigate
Saw the water spraying but stopped by the fence for the dogs to say hi and didn’t go around the corner
Saw three young children and their parents splashing in the street
Smiled at their happy
Then here came the truck to park by our curb
We watched from the sidewalk across the street
‘We’ being two dogs, three adults and the three hopeful children wanting to splash some more
This hydrant not making as many puddles as before
No splashing after all
Parting ways with, “Have a good day” and “See you later”
Blue and I cross for home
Staying dry other than bare feet through the puddles in the street
My boys slept through it
Had it not been for my dog I’d have missed it too

July 5, 2014
A snapshot of a moment from before 9:30am. My oldest woke up right after the dog and I came inside. The youngest will appear with some prodding before noon. The lazy hazy days of summertime are here.

Wednesday today
All day
July 31, 2013
I have to do that
Say it aloud
Because now I’m on today
4-H judging at the fair
Living one day at a time
We have enough
We have each other
We are thankful, blessed and loved
We are buoyed by all your prayers
Thank you

Change occurs over time.
Especially transforming change.
The outcome reflects the choices you make.
You decide how to live your life.
Food you eat.
Words you speak.
Friends you make.
Love you give and receive.
Today is new.
Make it fabulous, like you!
~Janean

July 29, 2013
These are the encouraging words I posted at Work in Progress on Facebook today with a photo of butterflies emerging from their cocoons and the words, “Trust The Process.” 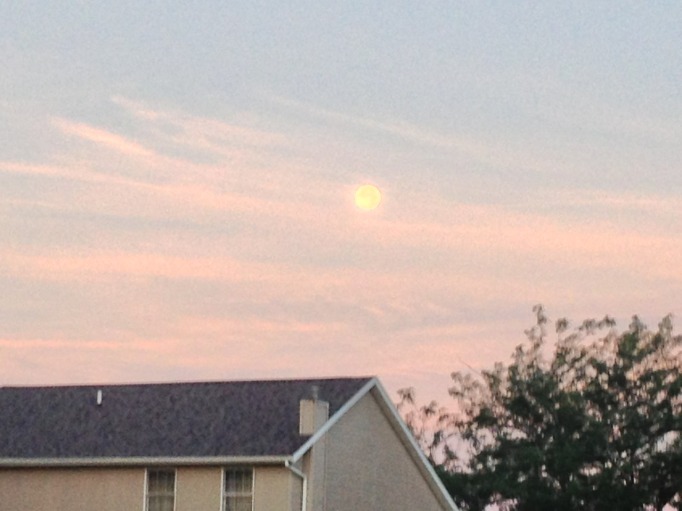 doggone dog I love
woofed before 5:30am today
he hasn’t done that for awhile
he’s learned to sleep in, my Blue
today he barked and fussed a bit
to let me know he really meant it
up and at ‘em
put summer clothes on
enough to hit the sidewalk
and be decent
we set off for the park
on our usual morning route
I quickly realized
the beauty of his timing
for Blue knew
it was a special morning
the moon so full and luminous
glowing o’er our heads last night
twas even more lovely
in the early morning light
with pale blue sky
behind the glowing sphere
wisps of pink clouds surrounding
to keep her from feeling bare, exposed
she shows her lovely luminescence
as a new day dawns
a morning moon lit the sky before us
as the sun rose to our backs
Blue and I kept moving forward
looping through the park
circling back toward home
always
home

My shamrock plant is still surviving. I never bought it special food. Sunlight and water (when I remember). So far, so good.
~Janean 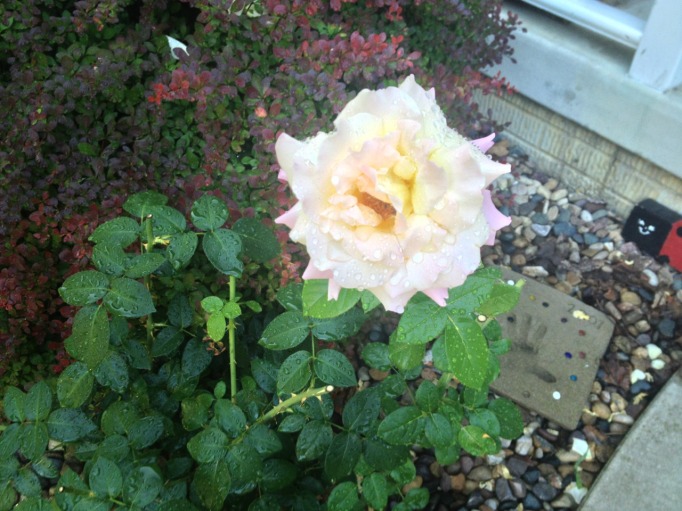 It’s time to recycle the painted and yellowing newspaper that has been atop my art table for over half a year. The date in the upper corner reads, “December 29, 2012.” Sounds just right, since I painted a really blue, blue sky, on New Year’s Eve, as 2012 became 2013. Then on New Year’s Day I glued the landscape collage titled, “orange, yellow and blue.” I’ve made several pieces of art this year so far. “Hooray! Make more art!” I say. The next landscape background that I paint, will be atop a current newspaper. I’m thankful for my wonderful neighbors who will gladly set me up with yesterday’s news to make art upon. ~ Janean

This morning, while on the sidewalk with Blue sometime before 6:00am, a neighbor greeted me first and then added, “That sure is a good looking dog.”
Made me grin and reply, “We love him.” Then the kindly, silver haired neighbor getting his newspaper said, “It shows. You walk him all the time.”
I looked at Blue and replied, “We walk our legs off.” Stated while keeping our forward momentum toward the park on our daily jaunt.