It happened again just now. A silver pest control truck slowed down and a silver haired mustachioed man said, “THAT is a beautiful dog.” I said, “Thank you” with a smile and he drove on. I turned to Blue, standing beside me in the driveway, and told him he is handsome. Traffic stopping handsome even. He’s a sweet one too. My faithful canine companion. Woof.

I think bad weather is still in the forecast for tomorrow. “Bad,” as in, “snow and ice.” But today?! Today is gorgeous outside with blue sky, white clouds and less vicious biting wind. It nearly feels like Spring, before chill seeps in. Lovely lovely beautiful sunshine day. Much needed.

I had fun printing out poems and snippets of thoughts about my Blue dog last night. This morning I put them in a 3-ring binder for my Grandpa with a pic on the cover and the title, “The Blue Collection.” A belated gift for my poet, story telling, fiddlin’ Grandpa.
I’m taking the last last jar of Alien Goo to him too, a.k.a. Green Tomato Pickles. I found ‘em hiding in the back of the pantry. Here I thought I’d delivered that last jar in November, when I made a trip via southbound train, the day before his 97th birthday.
Turns out I have a thing for packin’ pickles on the train. For I’m ridin’ the rails again today, but not alone, for my magical sister is sittin’ alongside me. We are not talkin’ as much as I expected. Just sorta chillin’ and enjoyin’ sittin’ quietly, playin’ on our idevices.
It is a beautiful day. A blue sky one, without any clouds in it. Oh, so lovely. 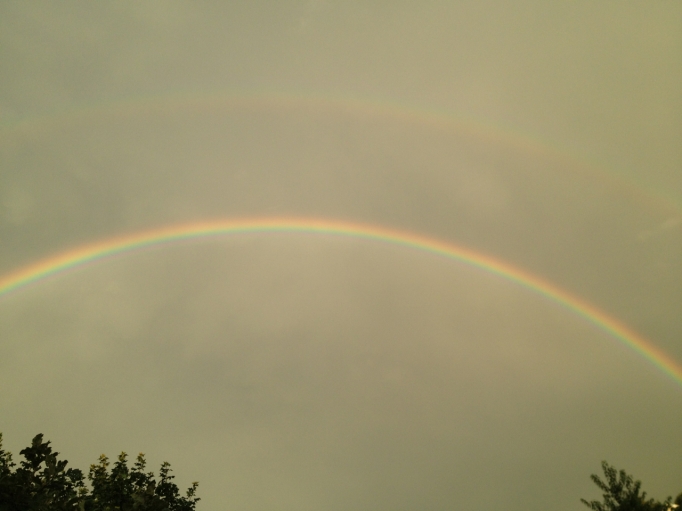 We had some more rain this evening followed by the biggest, brightest, most beautiful rainbow I’ve ever seen stretch across several houses that face my own backyard. I looked for a rainbow such as this all last summer. A sign from God that He keeps His promises. The significance of seeing a rainbow today, tonight, after a brief rainstorm, is that the printed copies of my oldest son’s book arrived today. The one he wrote for 4-H. The one that honors his father and the fight he’s been fighting for over a year now. The title is, “On May 25”. It’s a beaut of a little book that also honors the Lord as my twelve year old shares his heart, faith, belief in the power of prayer and the comfort that comes from the prayers of many for our family during this difficult time. My heart was already dancing, soaring and flying. This rainbow, a double rainbow, was an unexpected gift. SO BIG! SO BEAUTIFUL! Praying this new type of chemotherapy works. Praying for complete healing from stage four cancer. Praying to weather this storm with my family of four intact for many years to come. Thank you, God, for the reminder that You are there. Always. From the dark of night to the glow of sunrise, until the sun sets once more, and sometimes, the most special of times, You are in the translucent glow of a rainbow in a perfectly formed half circle.
~ Janean

Turquoise Tangles
Create a free website or blog at WordPress.com.